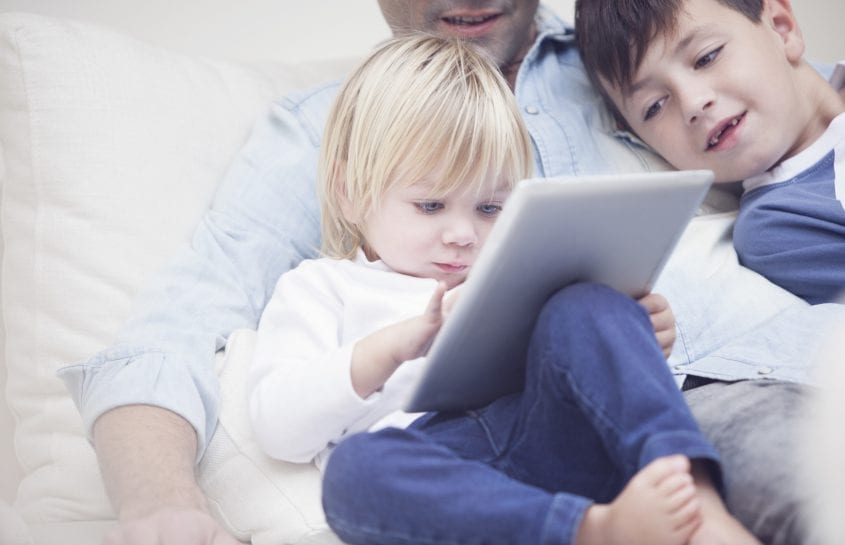 We check our phones upwards of 50 times per day — but when our kids play around with them, we get nervous. Are screens ruining childhood? Not according to children’s media expert Sara DeWitt. In a talk that may make you feel a bit less guilty about handing a tablet to a child while you make dinner, DeWitt envisions a future where we’re excited to see kids interacting with screens and shows us exciting ways new technologies can actually help them grow, connect and learn.

DeWitt describes an experience she had 20 years ago with a preschooler named Maria. Despite having never seen a computer before, when Maria was taught how to use a mouse, she slid the cursor across the screen and hovered over a character named X the Owl, who waved at the pair using the computer. Upon seeing this, Maria jumped up, and began frantically waving back at this character on the screen, that we adults know is only made up of pixels. But he was real to Maria. DeWitt describes the connection that Maria felt to this character as a genuine human experience that was perfectly appropriate for a three-year-old.

She then goes on to explain how Fred Rogers, of the PBS KIDS show Mr. Rogers’ Neighborhood, challenged society’s fears about technology, and used the medium of television to promote emotional growth in young children. Mr. Rogers spoke out through the screen and held a conversation, as if he were talking to each individual child watching.

Little Sponges aims to challenge society’s technological fears the same way that Mr. Rogers did nearly 50 years ago. By changing the way we look at mobile devices such as tablets and phones, we can see their true potential as a learning tool that can help children communicate with each other and the world around them.

DeWitt addresses three big fears that parents have when thinking about screen time for their children. When looking at these fears in the context of the Little Sponges program, we are able to see how beneficial educational content can be when used on a mobile device.

1) “Screens are passive. This is going to keep our kids from getting up and moving.”

Through our work with schools, we have seen time and time again that great online content can inspire active participation among the students. There are various modules in the Little Sponges curriculum that allow children to get up and move. Children naturally want to replicate things they see Mishka and Frog doing in the learning videos. One such example comes from the Gym Adventure, when Mishka and Frog demonstrate how to walk slowly and run fast while teaching students new vocabulary. Students naturally want to stand up and replicate Mishka and Frog’s movements, as well as wanting to repeat the vocabulary out loud while doing the activity.  The video below shows kindergarten students at Cincinnati Country Day School learning Spanish as they watch the Little Sponges Gym Adventure. As you can see, the students are actively engaged in their learning process. They are using multiple senses to learn new vocabulary words and phrases in Spanish.

This is something that our creative team keeps in mind when creating new content for the Little Sponges program. We create opportunities for children to be active in their learning process by singing, dancing, and exercising as Mishka and Frog take them on interactive learning adventures.

2) “Playing games on these screens is just a waste of time. It’s going to distract children from their education.”

While there are a many games on the internet that are simply for entertainment purpose, children enjoy seeing familiar characters in the games they play, which is why developers at Little Sponges have created educational games featuring the main characters of our program, Mishka and Frog. These interactive games reinforce the vocabulary that children are exposed to in the Little Sponges learning videos. Each adventure has its own set of games, in all six languages offered, that allow students to practice comprehending and reading new vocabulary in an interactive way. These games reward students with stars for answering questions correctly, encouraging them to keep learning as they collect all of the stars. The stars also allow teachers and parents to track the growth of each student throughout their use of the program, allowing them to create individualized learning plans tailored for each student. These games offer a stress-free alternative to standardized testing and allow a more accurate assessment of a student’s language skills, particularly for younger students.

Click here to play one of our fun, interactive games in Spanish! 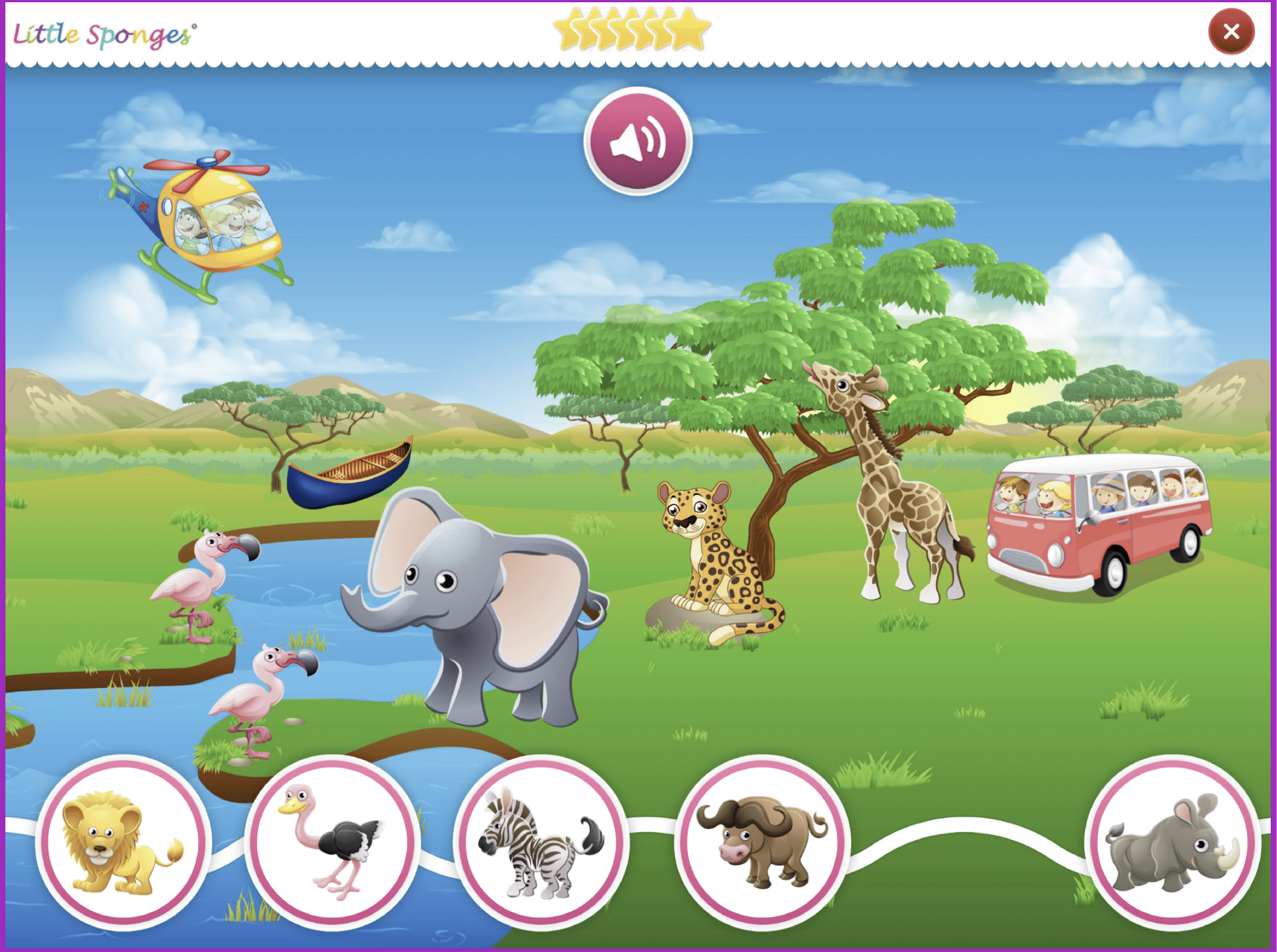 3) “These screens are isolating me from my child.”

As DeWitt says in her talk, kids love playing games with their parents. Being interactive in a child’s interest not only excites the child, but empowers the parents to take an active role in their child’s education. Simply watching the Little Sponges videos won’t do much for the learner if there is no dialogue about what they are learning.

Luckily, the Little Sponges program makes it easy for parents to learn with their children, as well as encourages students to learn together in the classroom.

Little Sponges creates an environment that welcomes students of all language skills. Watching the videos or playing the games as a group allow native English speakers to help their ELL friends develop English skills, but also allows ELL students to shine in their native language. This builds confidence for all students while learning a new language.

Each Little Sponges package also includes 300 vocabulary cards and Mishka and Frog hand puppets. Playing games such as holding up a vocabulary card and having the child name the picture in both languages not only reinforces what the child is learning, but allows the parents and teachers to take an active role in the child’s bilingual education.

As Sara DeWitt says, we are not suggesting that all digital content is great for kids, and while there are legitimate concerns about the screen content in children’s lives, learning to shift our focus to see the positives of online learning and education can greatly impact how today’s children grow.

Within the Little Sponges program, this includes hearing native speakers and the vocabulary repetition from the interactive games. Little Sponges aims to shape young minds, helping them adapt to the ever changing global world, and modern technology allows us to do that.

Little Sponges would like to thank TEDTalks and Sara DeWitt for the inspiration behind this blog post!