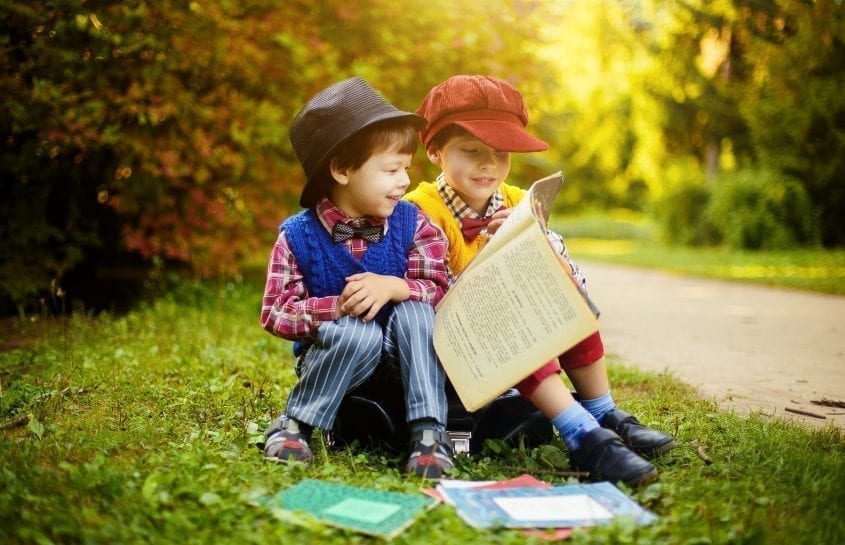 For decades, psychologists cautioned against raising children bilingual. They warned parents and teachers that learning a second language as a child was bad for brain development. But recent studies have found exactly the opposite. Researchers now believe that when people learn another language, they develop cognitive advantages that improve their attention, self-control and ability to deal with conflicting information.

Today the benefits of bilingualism are being put to the test in schools all across Utah.

Arrowhead Elementary is just one of the more than 100 public schools in the state that have launched language immersion programs in the past five years. At Arrowhead, that language is Mandarin. Other schools across Utah have created programs in French, Spanish, Portuguese, and German.

Supporters of immersion education argue that learning a second language is valuable preparation to participate in the global economy. But parents are most excited about what language learning could do for their children’s brains.

The first-graders of Arrowhead Elementary in Santa Clara, Utah, are giggling. Their math teacher, Jing Sun, has just made a little subtraction joke. She drew red circles on a whiteboard, erased one, and asked, “Where did he run away to?” The kids think it’s hilarious.

It’s a joke that could be made in any first-grade math class across the United States — except that here, in southern Utah, in front of a classroom full of blond children in braids and crew cuts, Sun is speaking Mandarin Chinese. That’s the only language she speaks in the classroom: English is, emphatically, not allowed here. And the students in this class, who have been in Arrowhead’s Chinese program only about two months, seem to understand almost everything Sun is saying.

At Arrowhead Elementary, half of the kindergartners, first-graders and second-graders spend half of each day in classes taught entirely in Mandarin Chinese. This model of language education is known as dual immersion: The students learn civics and reading in English, and math and science in a second language.

Arrowhead implemented its immersion program three years ago, hiring native Mandarin-speaking teachers through a partnership between the Chinese government and the state of Utah. Principal Susan Harrah initially faced some resistance from parents and staff.

“Our faculty just weren’t ready for it,” Harrah said. “A lot of them weren’t dual immersion teachers, so a lot of them had — not bitter feelings, but they didn’t want to have any part of any type of a language program at all.”

Arrowhead kindergarten teacher Jackie Fonnesbeck did not support the change. “I was very worried about the math, because that’s where they’re learning the basics, and I felt like they needed to have a good, strong base in English before they learn it in Chinese.”

Three years into the program, Arrowhead’s immersion skeptics have become its greatest fans. Test scores for immersion students at the school are slightly higher than they are for non-immersion kids. There’s a waiting list to get into the program. And the school’s teachers — even the English-language ones — are now big supporters.

“It’s fun to see them learning and talking in Chinese,” Fonnesbeck said. “It’s amazing these children can do this, because I sure can’t. The younger they get started, the better off they’re going to be. You’re in awe when you see it.”

WHAT’S GOING ON INSIDE THE BRAIN?

Brain researchers who study bilingualism believe that the act of juggling two languages strengthens the brain system that helps people pay attention. That strong capacity to focus might be what leads to better academic performance in some children who grow up bilingual or attend language immersion programs.

Canadian psychologist Ellen Bialystok, at York University in Toronto, studies how the brains of bilingual people work in comparison to people who speak just one language. She wires up the skulls of test subjects from both groups to an electroencephalograph (EEG), a device that records electrical activity produced by neurons in the brain. One of the experiments she performs is called the Eriksen flanker task, which measures a person’s attention and ability to screen out unwanted stimuli. Bilingual people generally perform better on the test than monolinguals.

In Bialystok’s cognitive performance lab, the test subject watches a computer monitor that flashes a set of five arrows arrayed in a line. Depending on where the center arrow is pointing, the subject clicks a computer mouse in her left or right hand. The arrows flanking the central target add cognitive noise to the pattern. The subject has to ignore those arrows and focus on the center one. The speed and accuracy of the test subject’s reactions are measured by the computer. The EEG detects how hard her brain had to work to sort out the target arrow from the flanking noise.

Bialystok believes bilinguals are better at tuning out the noise. Their brains may have a stronger “executive control” system because of the need to switch, mentally, between languages.

“What we now know based on massive research is that both languages are always active [in the brain] to some degree,” Bialystok said. So if French were her first language and English her second, “Why don’t half my sentences come out with French words by accident?” she asked.

That rarely happens in bilinguals, Bialystok said, because the executive control system — a network in the brain’s frontal lobe — is busy focusing the mind’s attention on English, screening out the French words. The network is a kind of traffic control system that helps organize and regulate thinking. When a bilingual person calls on the network to manage the traffic of dual languages, it gets stronger.

“Bilinguals are more efficient in resolving mental competition,” said psychology professor Judith Kroll, an expert on bilingualism and director of the Center for Language Science at Penn State. “They’re apparently able to keep languages separate while keeping them both available and active in their minds at the same time.”

Today, bilingualism is seen as having cognitive benefits, but that wasn’t always the case. When Bialystok was an undergraduate in the 1960s, psychologists saw bilingualism as a disadvantage.

“There was a profoundly pervasive belief that languages were hard for children,” Bialystok said. “And that if you made a child bilingual you risked, to quote a textbook of the 1950s, ‘mental retardation.’ ”

In our contemporary, multitasking society, notions have changed. A bilingual person with a strong executive control system may have an edge. “Everything that we do that requires focused, selective attention — ignoring salient distractors that are trying to compete for attention, shifting between two things that we are trying to do at the same time, manipulating information — that is all frontal lobe, executive function stuff,” Bialystok said.

In functional MRI scans of test subjects doing the flanker task, researchers can see that the part of the brain that is believed to house the executive control system uses less blood flow in bilinguals. It’s not working as hard.

Researchers have also discovered that bilingualism may provide some protection for the brains of aging people. Studies show that the onset of dementia occurs later in the brains of bilingual people. The executive control system, researchers say, is the last one to fully develop (think teenagers) and the first to decline, but strengthening it may slow that decline.

Bialystok and Kroll say one reason language can have such a profound effect on the brain is because of how deeply we are steeped in language. We use language constantly, to speak, to read and to think. Compare that to time spent in other cognitive activities such as practicing music or making mathematical calculations.

“Over the course of your life, you have vastly more experience using language than most of these other domains,” Kroll said.

Kroll and Bialystok caution not to get too far in front of the research by making assumptions about the benefits of bilingualism. Scientists are still working to determine exactly what mechanism makes bilingual brains gain greater executive control. And there’s no guarantee that growing up bilingual, or in a language immersion program, will prove beneficial for any given individual.

Immersion education is growing in the rest of the country. California and Minnesota have long been leaders in immersion, and Delaware recently implemented a new program modeled after Utah’s. According to the most recent numbers from the Center for Applied Linguistics (CAL), immersion education has been steadily increasing in the United States since the 1970s. In 2011, CAL counted almost 450 immersion programs across the country. Today, that number is almost certainly higher, as Utah in particular adds schools to its statewide program.

But language education in general is actually declining across the country, especially in the lower grades. Between 1997 and 2008, the percentage of elementary schools offering foreign language instruction dropped from 31 percent to 25 percent. And the numbers are even more striking when you consider only public schools, where the percentage of elementary institutions offering language education dropped from 24 percent to 15 percent over the same period.

Numbers like these make Gregg Roberts, Utah’s dual language coordinator, irate. “What are you thinking?” he says. “Why are you staying monolingual? Why do you think this will benefit your students in the 21st century? Why would you not be offering this benefit to your students?”

When it came time to register her boys, Tiger and Justin, for first grade, Stacy Steiner of Southern Utah had a choice: put them in Horizon Elementary School’s Chinese immersion program or enroll them in the school’s standard English program. Stacy was intrigued by immersion, but she was also nervous, particularly about Justin, who sometimes struggled in school.

“I was a little concerned about him not having the foundation they get in first grade,” Steiner said. “I thought that adding a language to that would be a challenge. So there was a lot of angst over that at the beginning.”

In the end, she chose immersion. On the first day of school Justin said he expected his instructor to teach Chinese “the normal way”: by saying something in Chinese and then telling the class what the words meant in English. But when they went into class, “She [couldn’t] talk any English — only Chinese!” he said. “And so I was like, ‘OK, how do we do this? This is going to be so hard.’”

Steiner said that she worried through the whole first month of classes about how her boys were doing, immersed in a language they had never heard before. That changed at the first parent-teacher conference.

Steiner has a recording she made of the meeting. On the screen, Justin sits with his teacher, reading from a sheet of Chinese characters. “Justin wasn’t reading English that fast last year,” Stacy marveled. “I was warned ahead of time that I would be surprised at how much they’d learned. But nothing really prepares you for that.”

“It has absolutely broadened my plans for my children,” she said. “I’m excited to see what they do with it.”